Happy Birthday Horst Milde. The man who "taught Berlin how to run" is turning 80. 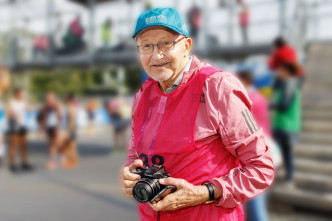 Horst Milde is celebrating his 80th birthday on Wednesday, October 24th. Born in Berlin, he initiated and developed the major running events for the SC Charlottenburg Berlin for decades, most notably the BERLIN-MARATHON.

Horst Milde was one of the early initiators at the inception of sports events for everyone, not just for club members. The BERLIN-MARATHON saw five world records during his time at the helm.

For his life's work, Horst Milde was awarded the "Merit of Honour" by the International Athletics Federation (IAAF) and he also received the Federal Cross of Merit. In early 2004, his son Mark took over the post of Race Director at the BERLIN-MARATHON. Horst Milde's wife Sabine and their other two children, Karsten and Gesine, also volunteered for many years for the big Berlin races.

Horst Milde, who grew up and still lives in the Berlin district of Tempelhof, started for TSV Tempelhof-Mariendorf when he was a young athlete. Later, he became a middle-distance runner for SCC Berlin and was German champion twice (1964 and 1965) in the 3x 1,000m relay for the club (relay team included Bodo Tümmler who later became1,500 m European Champion). Horst Milde clocked a personal best of 1:49.8 in the 800m.

Horst Milde was responsible for a series of pioneering initiatives. These include the introduction of the German Cross Country Championships and the chip timing system even before its official recognition.

Upon his proposal, there was a premiere at the 2009 World Championships in Athletics in Berlin: The marathon was won on a loop course through the city centre. The Olympic organisers from London in 2012 followed suit.

Horst Milde’s most striking achievements include the first cross-country race in 1964, the first BERLIN-MARATHON through the city centre in 1981, the New Year's Run through the freshly opened Berlin Wall on January 1, 1990, and the first BERLIN-MARATHON through East and West a few days before German unification in 1990. Milde has always had an eye on international developments as well. As a consultant, the Berliner has played a role in the successes of the Tokyo and the Athens Marathons.

Horst Milde ran the marathon himself several times – in New York, London, Boston and Vienna – and achieved a personal best of 3:42. For more than a decade, he was chairman of the athletics department for the club SCC Berlin, headed the department concerned with running for the general public at the Berlin Athletics Federation (BLV), and was involved in the committee for popular sports at the Berlin State Sports Association.

Horst Milde was also a long-time director of the International Association for Marathon and Long Distance Running (AIMS). As Honorary Race Director of the BERLIN-MARATHON, he is a supporter of the official AIMS Museum, which is integrated into the Berlin Sports Museum. He is also chairman of the AIMS Symposium, which takes place annually in Athens, and of German Road Races (GRR). Horst Milde still actively contributes the development of national and international running sports.

SCC EVENTS congratulates Horst Milde on his birthday and wishes him many more years of good health, great stamina and all kinds of wonderful experiences in all aspects of the sport of running.