Tirunesh Dibaba : Her objective is to run faster than ever before 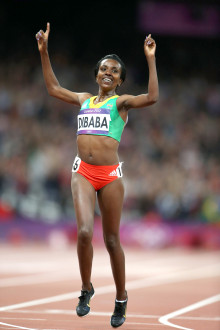 Tirunesh Dibaba of Ethiopia is the top name in the women’s field for the BMW BERLIN-MARATHON 2018. The record of her achievements is impressive indeed, winning three gold medals in total at the Olympic Games of 2008 and 2012 and five-times a World champion on three consecutive occasions – 2003, 2005 and 2007 and again in 2013. For good measure she has won the World Cross Country title four times. Her best time of 2:17:56, set at the Virgin Money London Marathon in 2017, is the third fastest ever by a woman. Her target in Berlin is at least to break her personal best. The fastest ever time by a woman is currently held by Paula Radcliffe who ran 2:15:25 to break the world record in 2002.

She doesn’t want to specify a particular time but it is clear that Tirunesh Dibaba is intent upon breaking her own national record of 2:17:56 from last year in London. That, at least, the 32-year-old is willing to concede: “I would like to get closer to Paula Radcliffe’s world record. That’s why I’ve decided to run in Berlin. Berlin has the fastest course and will also provide me with the best pacemakers.” She says that in her last four marathons she suffered for want of good “pacers.” This April in London when Mary Keitany set off on an almost suicidal pace in temperatures of 20 degrees Celsius – 67:16 for halfway, 46 seconds faster than Radcliffe in her world record of 2:15:25 of 15 years ago – Dibaba found herself on her own after 16, 17 kilometres. By 30 kilometres she had nothing left in the tank and dropped out in frustration.

This time, in a race where everything is geared to her needs, the outcome should be different and better. But Tirunesh Dibaba has done much more than simply rely on race director Mark Milde and his team. She has done her share of preparation as well. “At the World Championships in London I was still running the 10,000m. Since then I have passed my “apprenticeship” and feel I am a real marathon runner now,” she says and adds that she has also been increasing the volume of her training. In Addis Ababa she mostly trains with the group of coach Haji Adilo whose members include Roza Dereje, winner of Dubai this January, and Amane Gobena, who won Mumbai in the same month. Dibaba also does regular sessions of strength work in the gym.

In April 2014 Tirunesh Dibaba finished third in London in 2:20:35 on her marathon debut. She didn’t run an autumn marathon in Chicago or New York since by that time was pregnant. Her son was born in March 2015 and, as befitted the social standing she had by then achieved, she gave birth in a private clinic in Atlanta in the USA. Tirunesh Dibaba is not simply a fast runner, she is Ethiopia’s most successful female athlete of all time, admired and honoured, the female counterpart to Haile Gebrselassie. She owns an eleven-storey business premises and a five-star hotel while living in a luxurious home. Such is her prestige that Addis Ababa university awarded her an honorary doctorate and a hospital is named after her.

Then came the wedding with Sileshi Sihine, himself a double Olympic silver medallist, in October 2008. There were unprecedented scenes in Ethiopia as it became known as the wedding of the century – based on the “Millennium Celebrations” which Ethiopia celebrated in accordance with the Coptic calendar seven years later than the rest of the world. Tirunesh and Sihine bought their wedding outfits in Milan with everything of the highest quality. The various parties and receptions lasted ten days. As the newly weds were driven in a coach around Meskel Square in the centre of Addis Abeba, the Ethiopian media reported that around half a million people were expected.

Tirunesh is the second of the successful Dibaba sisters. Ejegayehu, the eldest, won the Olympic silver medal at 10,000m title in Athens in 2004. At present Genzebe is the “Non Plus Ultra” of the middle distances, no-one can match her, while 21-year-old Anna is already a runner. That they all run is because of Derartu Tulu. The Olympic champion of 1992 and 2000 for 10,000m is their cousin. Anna Dibaba speaks good English and often acts as interpreter for the sisters, as she did in our interview with Tirunesh. At her first appearance at the IAAF Gala in Monaco in 2014, one observer wrote on the internet message board of www.letsrun.com: “Incredible, each younger sister is even better looking than the older one – and Tirunesh herself is stunning. It’s a shame their parents didn’t continue!” The message poster and other interested parties should be aware that there is in fact another younger sister: 19-year-old Melat. The five Dibaba sisters, raised in the countryside without running water and electricity along with their brother Dejene, a marathon runner, are today Ethiopia’s glamour girls. They’ve come a long way from Chefa near the town of Bekoji in central Ethiopia.

It was in 1999 that Tirunesh as a 14-year-old travelled to the capital. The idea was that she would stay with her sister Ejegayehu and continue her education at secondary school. But she missed the deadline for registration by a couple of days. What was she to do? She didn’t want to return to Bekoji because she feared her parents might force her into an early marriage as was the custom in the countryside in Ethiopia. So she stayed in Addis Ababa. After a while she was recruited by the Prison Police sports club and from then on things progressed rapidly. She hadn’t even turned 17 when she won the silver medal among the juniors at the 2002 World Cross Country Championships and a year later in Paris she won the 5,000m at the World Championships at the age of 17 years and 333 days, the youngest ever world champion. Before her 20th birthday she became the first woman to achieve the World Championship double of 5 and 10,000m. In total six Olympic and 15 World Championship medals, 13 of them gold, represent her medal haul so far. In addition she has set seven world records and two world bests on the road.

In Berlin this super athlete with the face of an angel wants to write another chapter in her success story. But she is already thinking about Tokyo 2020. It would be her fourth Olympic victory over three different distances.

Detailed info and statistics can be found in our Media Guide

Tirunesh Dibaba will be part of the show at "Meet the Stars" on Friday at the Hall of Fame near Brandenburg Gate at 6.30 pm.