What do a hot dog, a wrestler and 42 km have in common? 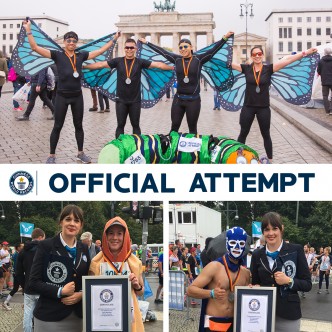 Record potential! We see them again and again, the colorfully disguised combatants on the race track, who don't seem to be satisfied with normal running gear. From fancy dresses as various foodstuffs to animals and well-known cartoon characters, everything is included — for the special pleasure of the audience, which cheers particularly loud when those runners pass by.

Many people just do it for fun, but some of them aim for ambitious goals with their costumes: a Guinness World Records title. Bernardo, who lives in Ireland, took part last year and successfully broke the record „Fastest marathon dressed as a lucha libre wrestler (male)“ in his Mexican touched wrestling costume.

Bernardo, what motivated you to set a world record at the BMW BERLIN-MARATHON?

“I have always wanted to share a part of Mexican traditions and folklore with the rest of the world. And Guinness World Record gave me the perfect stage to do so through my favorite activity (running)”.

Was it difficult to find the right costume?

“It was not difficult. The guidelines specified clearly what was required.”

What was so special about setting the world record at the BMW BERLIN-MARATHON?

“I loved watching the smile of people during the course when they looked at me all dressed up. It was such a nice experience making so many people smile.”

Would you like to see how a record attempt can take your participation in the marathon to a new level? Then apply now until 31st May 2018 at www.guinnessworldrecords.de.

More about registration can be found here.