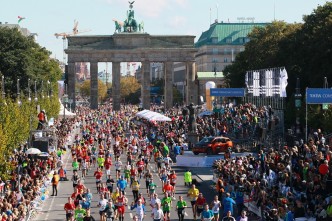 With an overwhelming interest in participating in the 2014 BMW BERLIN MARATHON a record number of 74,707 runners pre-registered for the lottery.

After the pre-registration phase (September 30 to October 14) there will be a random selection of participants from the pool of registrants on October 30, 2013 to receive starting spots for the 2014 BMW BERLIN MARATHON. Participation is limited to 40,000 runners.

Those who are selected will then receive notification with a registration code. The binding registration must then be completed between November 4 - 11, 2013. Any spots that are not confirmed during this time period will be offered to pre-registered candidates according to the order in which they were randomly selected.  These remaining spots must be confirmed by the binding reservation between November 25 and December 2, 2013.