Drafting is Out – the New Dimension of Speed Skating

A Review of the 40th BMW BERLIN MARATHON Inline Skating 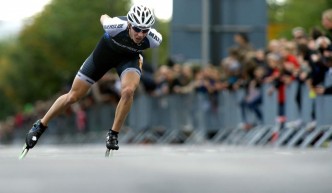 No need for help... Bart Swings all alone on the streets of Berlin.
© Camera 4

For years, professional inline speed skating has been considered to be purely a tactical sport, where the decisions were made in a final mass sprint over the finish line. Some of the champions were even criticised for drafting too much along the course and not doing enough work at the front. Bart Swings (Powerslide/Matter) has proven that it can also be done differently. Just before the halfway mark, he took off on his own, forgoing any drafting work from his teammates. Not for a moment did it look like he had any question about his superiority – a sense of self-confidence that he found on the ice. “On the ice, everyone is on his own; it is just a race against time”, says the Belgian, who is preparing at the moment for the Winter Olympic Games in Sochi, where he has a good chance for a medal. Time also played an important role in Berlin. For the first time in the history of the BMW BERLIN MARATHON the magical barrier of one hour was cracked. After just 59:28 minutes, he crossed the finish line, setting a new world record – and without drafting!

The woman’s finish had also looked pretty much the same throughout the years: a large group flew towards the finish and a few millimetres determined the difference between victory and defeat. After 42 kilometres of skating together, the decision was usually made in a mass sprint.  It was thus no wonder that the women’s champion, Manon Kamminga (Powerslide), even needed a few minutes herself after crossing the finish to realise what she had accomplished. After her successful attack at the halfway mark, she rolled across the finish on her own over four minutes ahead of the women’s field. That had never happened before in the recent history of the BMW BERLIN MARATHON.  Many spectators missed this spectacular solo win at the finish line, mistaking the 21-year-old from the Netherlands for one of the men. “I thought the whole time that the women’s field was directly behind me,” Kamminga said about her flight at the front.

Even though performances by the two champions would indicate otherwise, we are not quite ready to say goodbye to drafting entirely. One could see its effects along the entire course. And drafting is simply fun!  While runners have to depend on their own inner tenacity to make it through the infamous “wall”, inline skating is a group experience. Together they experience the intoxicating feeling of speed, and they can alternate at the lead to help get through the low moments. And even for those less experienced, the 42.195 kilometres fly by!

Before the race, freestyle skaters provided a true air show.  At the Brandenburg Gate, they performed spectacular leaps in the air, even flying over BMW vehicles, before making way for the kids’ race. Almost 120 youth skaters participated in the SCC Skating KidsCup, the final event in the race series for kids up to age 13. While the experienced skaters raced for fame and glory, the less experienced skaters had their own fun too. The organisers from SCC Skating accompanied the youngest skating stars, providing support as they made their way through the Brandenburg Gate.

Just skating a marathon was not enough for some of the skaters – almost 200 skaters sought out the challenge of a double start. 155 men and 40 women exchanged their skates on Sunday for running shoes so they could enjoy the course once again more slowly. Cornelia Käser (5:56:11 h) and Antoine Lesavre (5:04:26 h) were the winners in the double event.

In addition to the professional skaters in the category Speed/Teams, there were also two champions in the Fitness category worth mentioning by name: Benjamin Feer (1:14:41 h) and Juliane Unterdörfel (1:14:45 h). But whoever was watching the finish just beyond the Brandenburg Gate and saw all of the happy finishers of all ability levels knows that there were countless other champions – but there is not enough space here to name them all. But we would like to use this opportunity once more to congratulate all of the participants on their fabulous accomplishments. You are what makes BMW BERLIN MARATHON Inline Skating!