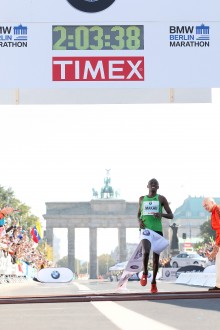 A knee injury has forced marathon world-record holder Patrick Makau (Kenya) to withdraw from the BMW BERLIN MARATHON to be run on September 29. “I intended to attack my own world record in Berlin but now the first thing on my mind is to fully recover from this injury so I can return to training”, said Makau. He had earlier consulted the Kenyatta National Hospital in Nairobi where he was diagnosed with an inflammation in his left knee and ordered to stop running completely and rest the knee until the inflammation subsides.

Makau won the BMW BERLIN MARATHON twice (2010 and 2011), setting the still standing marathon world-record of 2:03:38 hours in 2011. For this year’s race, he planned to attack this mark together with compatriot Wilson Kipsang. In 2011, only a few weeks after Makau’s record run in Berlin, Kipsang himself had missed the record by just four seconds in Frankfurt.