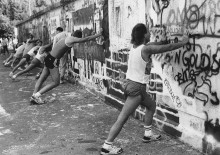 Runners streching in front of the berlin wall

Just three weeks to go. Time flies to the big moment when 40,000 runners will get together for the 40th anniversary edition of the BMW BERLIN MARARTHON. Here is part II of our countdown – a best of about the 42,195 kilometres through Berlin.

Back to 1990: Blue racing line on the asphalt all the way to the finish

For the first time, a blue racing line was painted on the asphalt a few nights before the BERLIN MARATHON to mark the ideal course all the way to the finish.

The photos of the runners warming up before the start of one BERLIN MARATHON demonstrate some unintentional symbolism: as they stretched, some athletes leaned against the Berlin Wall, which for nine years was one of the most prominent landmarks along the course.

Back to 1984: Scandal involving the champion - John Skovbjerg

In 1984, 8,834 runners started out in a heavy downpour. Nonetheless, 350,000 spectators lined the streets, and there were two unexpected course records: Agnes Sipka of Hungary became the first woman to finish under 2:40 in a time of 2:39:32, and John Skovbjerg, who got away from the German favourite Wolfgang Krüger on the last few kilometres, finished in 2:13:35. But there was a bit of excitement about the Danish champion after the race: Skovbjerg had bent his race number, making it impossible to see the sponsor information, and he was almost disqualified. In the end, he was penalised with a reduction in his prize monies, which by then had reached 100,000 DM.

In 2001, 29-year-old Olympic champion from Japan, Naoko Takahashi, was crowned at the BERLIN MARATHON. She was the first woman to finish the classic distance of 42.195 km in under 2:20. She crossed the finish at Tauentzienstrasse in 2:19:46, and Japan celebrated their national heroine. Joseph Ngolepus of Kenya finished his race just 11 minutes earlier, winning in 2:08:47. That was the shortest time between the top male and female times in the history of the race. When Naoko Takahashi crossed the finish at about 6:30 pm Japanese time, almost every second person in Japan was watching. Over 53 million people followed the race on TV, which meant a viewing rate of 53.5%. The average viewing rate of the almost three-hour broadcast was 36.4%

Back to 1987: First african Marathon-Champion

The West German record-holder, (Christoph Herle: 2:09:23) gave up at the 33 km mark. Suleiman Nyambui, who won silver in the 5000m at the Moscow Olympics in 1980, became the first African champion at the BERLIN MARATHON, just missing the course record by eight seconds.

Back to 1992: Opponents of the Olympic bid pour paint from the Yorck Bridges

Opponents of Berlin's bid for the 2000 Olympics caused some commotion in 1992. They poured litres of paint onto the road from the Yorck Bridges. Fortunately, the paint attack did not have much of an effect. The runners at the front only got a few splashes of paint and nobody slipped.

Back to 1984: Back then there were categories for the fastest runners from each Berlin district

The organisers had other problems than those with Skovbjerg, however. Some of the runners crossed the finish, but did not run the full 42.195 km. Attempts to cheat -- by taking the subway or a bike -- happened again and again. One of the most blatant ones took place in 1984. At the time, there were prize categories for the fastest runners from each Berlin district. The fastest runner from Kreuzberg was a 16-year-old boy, who almost broke the German record -- and due to this top time, his attempt to cheat quickly came to light.

Back to 1981: First prize monies at the BERLIN MARATHON

In 1981, Ian Ray of England was the first to cross the finish near the Gedächtniskirche (Memorial Church) in 2:15:41.8. He thus won the first prize money offered at the BERLIN MARATHON: 1,000 DM.

Pacemaker Lameck Aguta (Kenya) caused some confusion when she decided not to drop out, and after leading for a while finished fourth.

Back to 1987: Start in front of the Brandenburg Gate

In 1987, when over 15,000 runners started out for the first time at the Brandenburg Gate rather than in front of the Reichstag, a German runner, Christoph Herle, was still the favourite.