Top field to compete at the 40th BMW BERLIN MARATHON: strong competition for Makau and Kipsang 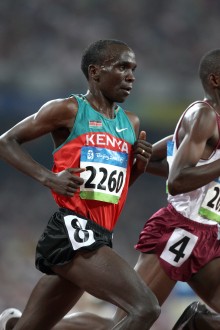 In addition to the number one and number two in the world, world-record holder, Patrick Makau, and Wilson Kipsang (both of Kenya), several other top-notch runners will be competing in Berlin on September 29: Eliud Kipchoge (Kenya) was crowned world champion in the 5000m in 2003 and won Olympic bronze in 2004 and silver in 2008.  He made an impressive marathon debut this past spring, with a dominating win in Hamburg in 2:05:30. Geoffrey Kipsang is only 21 years old and is considered to be one of the top running talents from the Kenyan highlands. In 2011, he was junior cross-country world champion, and a few weeks later he won his first half marathon (in Berlin); half a year later he served as the pacemaker for Haile Gebrselassie at the BMW BERLIN MARATHON, which Patrick Makau won with a new world record. One year ago at the same race, he took third place in a time of 2:06:12. Marilson Dos Santos of Brazil (personal best 2:06:38) has already won the ING New York City Marathon twice (in 2006 and 2008) and placed 5th last year amidst a top field at the Olympic marathon in London.

This strong field promises an exciting race. In addition, Irina Mikitenko hopes to set a new world record for the Master’s class, which is currently set at 2:25:43 – a real possibility for the 41-year-old, who is still Germany’s fastest female marathon runner.