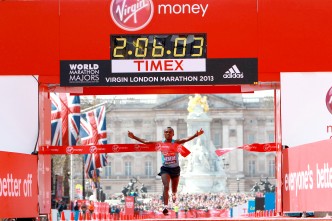 After perfect weather conditions in Boston, the Virgin London Marathon had super weather conditions. Starting out in  a fast pace, clocking 28:56 for 10k, the men’s race was thrilling to the end. A group of five runners, including Emmanuel Mutai, Stanley Biwott (both Kenya), Ayele Abshero, Yared Asmerom and Feyisa Lilesa  (all Ethiopia) tried to make their move at 15k.. Promising Tsegaye Kebede, who was in the lead pack until close to 20k, fell back and was 19 seconds behind at 30k.It already looked like the Bank of America Chicago 2012 winner was out of the rankings, especially when at 35k he was 49 seconds behind leading Biwott and E. Mutai. But then  the small men got it all together and started a stunning catch-up race. While Stanley Biwott was falling apart and slowing down with every step, London course record holder (2011/2:04:40) E. Mutai  picked up speed and took the lead. It looked good for him, but suddenly Kebede was flying past him at 41k.. Tsegaye Kebede won finally in 2:06:04. Feyisa Lilesa (ETH) got 4th in 2:07:42 and Wilson Kipsang (KEN) 5th in 2:07:43.

The women’s race was no less exciting. After Rita Jeptoo won in Boston earlier this week, it was now Priscah Jeptoo who claimed the victory at the Virgin London Marathon in 2:20:15. This was just one second outside her personal best and after a third place in London in 2012 this was her first win at a World Marathon Majors race for the first time. Olympic Champion Tiki Gelana of Ethiopia looked good until 25k, but at a feeding station she was knocked to the ground by a wheelchair athlete. She kept going, although bruised, and finished 16th. Second was New York winner (2010) and World Champion (2011) Edna Kiplagat, who finished second in 2:21:32. Third place went to Japan’s Yukiko Akaba in 2:24:43, placing for the first time Top-3 in a World Marathon Majors race. The Ethiopians Atsede Baysa and Meselech Melkamu clocked 2:25:14 and 2:25:46, finishing 4th and 5th.

Tsegaye’s victory in London kept him in the lead of the World Marathon Majors with a margin of 24 points over Wilson Kipsang, who claimed just one point from his fifth place. Wesley Korir is now third with 27 points. Three men are tied for the fourth place with 25 points: Boston 2013 winner Lelisa Desisa (ETH), London Olympic Champion Stephen Kiprotich (UGA), and Berlin winner Geoffrey Mutai (KEN).