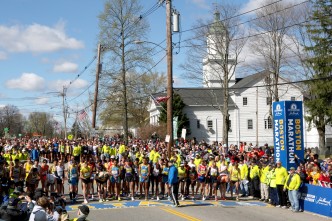 The Series picks up in Boston on Monday, April 15, where the top two finishers from last year’s race will face each other once more. Defending champion Wesley Korir of Kenya can catapult to the top of the WMM leader board with a third place finish or better, unless his countryman Levy Matebo turns the tables on him with a victory in Copley Square. Korir currently sits in third with 26 points (1st Boston 2012; 5th Chicago 2012), while Matebo is tied for sixth with 15 points (2nd Boston 2012). Top-ranked American Jason Hartmann (tied for 14th with five points) looks to improve upon his fourth-place showing last spring.

The 2013 Boston Marathon will be streamed live online for free at http://watchlive.baa.org/ starting at 9:30 a.m. ET.

Should Korir or Matebo claim the Series lead on Monday, Ethiopia’s Tsegaye Kebede (1st Chicago 2012; 3rd London 2012) and Kenya’s Wilson Kipsang (1st London 2012; 3rd Olympics 2012), currently tied atop the leader board with 35 points, will have less than a week to wait before attempting to reclaim their positions on April 21 in the British capital. But London is far from a two horse race. A host of Series contenders will be on the start line in Greenwich Park, including Stephen Kiprotich of Uganda (1st Olympics 2012) and Geoffrey Mutai of Kenya (1st Berlin 2012), currently tied for fourth with 25 points, as well as three athletes knotted with 15 points apiece: Abel Kirui of Kenya (2nd Olympics 2012), Martin Lel of Kenya (2nd London 2012), and Feyisa Lilesa of Ethiopia (2nd Chicago 2012).

The women’s 2012-2013 WMM Series is wide open as current leader Mary Keitany of Kenya is inactive this spring awaiting the birth of her second child. With only a five-point advantage, Keitany is vulnerable to any number of athletes, including Boston entrants Sharon Cherop of Kenya, the defending race champion who is currently second in the Series standings with 25 points, as well as Kenya’s Rita Jeptoo (2nd Chicago 2012) and Ethiopia’s Tirfi Tsegaye (2nd Berlin 2012) with 15 points each.

With reigning two-time champion Keitany out, the London title is up for grabs, and with it might come the WMM Series lead. A trio of athletes currently tied for second in the standings with 25 points are among the favorites. They include Ethiopia’s Atsede Baysa (1st Chicago 2012), Ethiopia’s Tiki Gelana (1st Olympics 2012), and Kenya’s Priscah Jeptoo (2nd Olympics 2012; 3rd London 2012). Also in the London mix are Kenyans Edna Kiplagat (2nd London 2012) and Florence Kiplagat (4th London 2012), with 15 and 5 points, respectively.