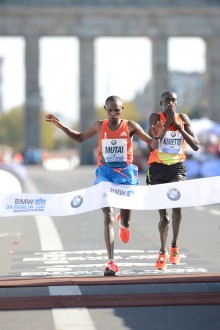 Geoffrey Mutai of Kenya re-established his claim to be the world's best marathoner this morning, but only just.

Mutai, 31 next week, clocked the fastest marathon in history when he won a windswept Boston 2011, in 2.03.02. The drop on the point-to-point course means that the time was not considered for a world record. That honour went to his compatriot Patrick Makau, who won here in Berlin a year ago, in 2.03.38. But Mutai underlined his winning credentials when he won New York Marathon a month later, also in a course record (2.05.06).

But Mutai dropped out of this year’s Boston race, and, like Makau suffered the vagaries of Kenyan selection policy when he was not considered for the Olympic Games in London.

Determined to attack Makau’s time on a Berlin course which has hosted seven world records in the last 15 years, Mutai’s attempt seemed doomed at halfway, in 62min 12sec, when he and colleagues, Kimetto, Kipsang and Jonathan Maiyo were over 30 seconds down on their target time.

But so speedy was Mutai with a surge between 30 and 35k (14.19), which killed off Maiyo and Kipsang, that a record seemed a distinct possibility with just three kilometres left to run. But that effort had put paid to the record chances, and interest switched to Kimetto’s challenge.

Kimetto, 28, had won both the Vattenfall BERLIN HALF MARATHON and the Berlin 25k (in a world best) earlier this year, with second half surges; and looked so comfortable loping alongside Mutai that a third Berlin victory this year seemed a distinct possibility. Even when Mutai took a couple of metres lead after 35k, he could not drop the younger man. But Kimetto’s challenge evaporated in the final stages when he failed to pressure Mutai, and seemed content to follow his colleague home a stride or two down.

The finish recalled the circumstances of Paul Tergat’s 2.04.55 world record run here in 2003, when training partner Sammy Korir challenged him right to the line.

Nevertheless, he pronounced himself well satisfied with his speedy debut, and Mutai immediately said he thought his younger colleague was a potential world record holder. As for himself, Mutai said, “we had a chance to break the world record, but the first half was a little slow. I tried to push it afterwards, but I was having a problem with my left leg, so I just tried to maintain the pace until the finish. But I am happy with that”.

Mutai’s time is the fastest of the year, and victory secures him the overall men’s prize in the World Marathon Majors 2011-12. Mutai and Kimetto ran the fourth and fifth fastest times in history (discounting Boston), and nine runners have now broken 2.05 this year, also a best.

The women’s race was more straightforward, and also ended in a one-two for training partners, the Ethiopians Aberu Kebede and Tirfi Tsegaye. Kebede won here in wind and rain in 2010. The contrast in conditions could not have been more marked. Both races began in bright sunshine at 9am, but with a perfect temperature of 10C (48F), rising to 14C (55F) by the finish; with little wind to hinder progress. And though she was accompanied well past halfway, when Kebede surged ahead of her colleague after 30k, she went on to win as easily as two years ago, albeit some three and a half minutes faster, and in a personal best by three seconds. Tsegaye also improved her best by over 20 seconds, while third placer, Olena Shurhno set a Ukraine national record of 2.23.32.