Aberu Kebede targets sub 2:20 time and may have company on Sunday 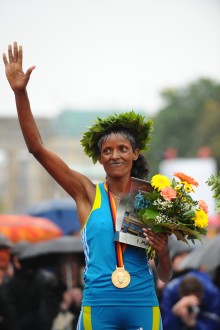 When Aberu Kebede woke up this morning, and saw the rain sheeting down on a sombre Berlin, she must have though that she was in for a re-run of the marathon two years ago, remembered locally as “the rainy race”. But since she won that one by over a minute, in 2.23.58, a shower or two for Sunday morning’s 39th BMW BERLIN MARATHON might have seemed like a good idea.

Not a bit of it. “Oh, no, I’d prefer pleasant conditions, no rain, and not too cold,”she said at this morning’s press conference. And it looks like she’s going to get “pleasant conditions”; the forecast is for temperatures between around 8C (46F) at the 9 am start, to around 13C (55F) by midday, with little or no wind.

Berlin is often touted as the “world record”course, hardly surprising since there have been seven in the last 15 years, the most recent being Patrick Makau’s 2.03.38 last year. But it has been 11 years since the women’s record fell in the German capital, and it was a big one, the first women’s sub-2.20 in history, by Naoko Takahashi of Japan, the year following her Olympic victory in Sydney.

But both Kebede and training partner Tirfi Tsegaye reckon that is within reach. Kebede would have broken the Ethiopian record with her 2.20.33 in Dubai in January this year, but for the minor inconvenience of three of her compatriots finishing ahead of her, with winner Aselefech Mergia taking both victory and the national honours with 2.19.31.

But Bezunesh Bekele, who had finished over a minute behind Kebede in Berlin 2010 was a few strides ahead of her in Dubai. That and the presence of training partner Tirfi Tsegaye here in Berlin will give impetus to both of them. Tsegaye won a windy Paris Marathon earlier this year, in 2.21.40, but both feel that their training sessions in the hills of Entoto, just outside the Ethiopian capital of Addis Abeba have set them up to join the sub-2.20 club.

“I wanted to come back here, after winning two years ago,”said Kebede, “I feel confident I can produce another good result. If everything goes well on Sunday, I think I can run under 2.20. That’s my aim.”

Tsegaye said, “Yes, we train together, but there’s no real rivalry, although obviously we both want to win. I think I can improve on my 2.21. We’ll run together from the start, then see what happens,”added Kebede.

There has been a strong Japanese presence in Berlin for over a decade, since Takahashi made marathon history here. Yuri Kano is the leading contender this year. At 33, she is a decade older than Kebede, and with her best of 2.24.27 dating back to a second place in Tokyo 2008, may struggle to achieve a seventh Japanese women’s win since Kazumi Matsuo’s first in 2000.

Kano spent six weeks at altitude in Boulder, Colorado in August, breaking her stay to finish third in the Virginia Beach half marathon. “I didn’t have a great year last year,”she said, “but I’ve heard so much about the Berlin course, I’m hoping to re-establish myself with a good time here.”

Another Ethiopian contender,  Ashu Kasim ran a personal best 2.23.09, to win in Xiamen (China) at the beginning of the year; and much is expected of marathon debutante Kenyan Caroline Chepkwony, who finished third in this year’s Vattenfall BERLIN HALF MARATHON, but won the Berlin 25k in May.