Who can challenge Geoffrey Mutai at the BMW BERLIN MARATHON on September 30th? 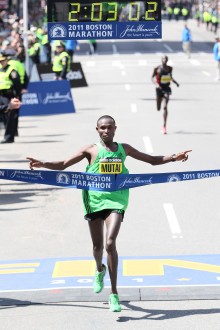 Leading the elite filed at the 39th edition of the BMW BERLIN MARATHON on September 30th is Geoffrey Mutai (31) from Kenya, the man who ran the fastest marathon ever winning the Boston Marathon last year clocking 2:03:02 hrs. The time however cannot be recognized as a world record since the Boston course does not meet the requirements for records (the maximum incline is one metre per kilometre, start and finish should not be further apart than 50 % of the total race distance). The incline on Boston?s point to point course is 139 metres. The official world record stands at 2:03:38 by Patrick Makau (Kenya). He ran that at the BMW BERLIN MARATHON last year.

His challengers are Jonathan Maiyo (26) from Kenya who ran his PB in February placing 4th at the Dubai Marathon (2:04:56), Deressa Chimsa (35)from Ethiopia (2:05:42), and Nicholas Kamakya (27, Kenya, 2:06:34). There are two possible contenders to watch out for. Both are first timers on the marathon distance and both have won the Vattenfall BERLIN HALF MARATHON. Geoffrey Kipsang (Kenya) won the race last year being just 19 years old and has improved his PR at the distance meanwhile to a world class level of 59:26. Dennis Kimetto (26) won it last April (59:14) and several weeks later clocked a world record for 25 kilometres (1:11:18).

The race is televised live nationally (n-tv and Eurosport) and will be shown live in 194 countries worldwide.