Countdown: 15 days to go - The long way to the finish - the medals 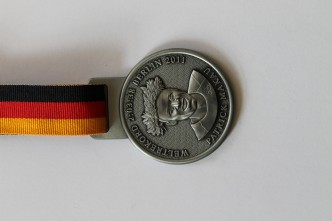 This year's medal of the 39th BMW BERLIN-MARATHON
© SCC EVENTS

Every year, many runners from around the world come to Berlin to participate in the BMW BERLIN-MARATHON. But not only the runners have a long way, but also the medals, which every participant will receive at the finish as a reminder of this unique experience at the 39th BMW BERLIN MARATHON.

The medals are produced in Johannesburg, South Africa and are already on a ship from Cape Town to us. Overall, 53,500 pieces are distributed in the finish area, 38,000 among runners, 9,000 in mini-MARATHON and 6,000 medals among the skaters.

On the medals of the runners is mostly the image of a marathon Olympic champion. But often, as in this year, the Medal will be decorated with somebody who has accomplished something huge in our marathon such as Haile Gebrselassie and Patrick Makau. The latter will be pictured on this year’s medal, as he has run the world record of 2:03:38 hours last year.

The skater’s medal usually adorns the face of the last year’s BMW BERLIN-MARATHON winner. This year will be an exception due to a sad occasion. Our former colleague Alexander Uphues, who was killed in an accident last year, will be honored on the medal. For many years, he was responsible for the Inline Skaters at SCC EVENTS.