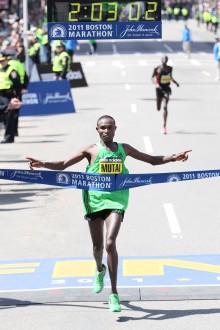 The current world record stands at 2:03:38, set by Kenyan Patrick Makau at the BMW BERLIN-MARATHON in 2011. Geoffrey Mutai ran the Berlin course in 2010, finishing only two seconds behind Makau in a fast 2:05:10 despite persistent rain throughout the race. Earlier that year, Mutai ran 2:04:55 to finish second in the Rotterdam Marathon (behind Makau).

“We are pleased to have Geoffrey Mutai run the BMW BERLIN-MARATHON. He is one of the best athletes in the world and will have the opportunity to prove it on the fast Berlin course,” said race director Mark Milde.

Surprisingly, Geoffrey Mutai was not nominated to participate in the Olympic marathon team in London (Patrick Makau was also sidelined). Mutai regards this decision as a challenge to run a strong race in Berlin.“I am familiar with the Berlin course and know that you can run very fast here. If the weather is good, there is nothing in the way of a fast time,” said the Kenyan. His performance in a late-June 10 km road race showed him to be in top competitive form when he won the Boston race unchallenged in 27:29.

*Records may be sanctioned only when set on courses that conform to certain criteria. The finish line must be located no more than half the course distance from the start line (21 km). Additionally, the net elevation change between start and finish must not exceed 1 meter per kilometer (42 m).

Started in the late 19th century, the Boston Marathon course was based on the first modern-day marathon held in the 1896 Summer Olympics in Athens. The course is more or less flat from the start to the halfway point before sloping upward at 26 kilometers from which point the course includes notable slopes (Newton Hills, “Heartbreak Hill”) until approximately the 34 kilometer mark. The last 8 kilometers have a slight decline.