Despite the sell-out – tickets for the Inline Marathon are still available! 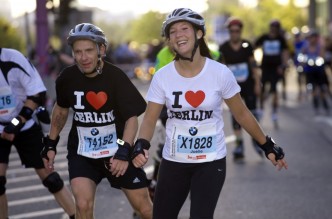 It’s all sold out for the 39th BMW BERLIN MARATHON 2012. At least for the running marathon. Nonetheless, you can still be part of it – in a very face-paced race of inline skaters. The BMW BERLIN MARATHON Inline Skating has become a classic race of its own, offering a magical marathon atmosphere on the same course – but a day before the runners head through the German capital.

So, what to do now that it is sold out? Many disappointed runners were undoubtedly asking themselves that last week, when the last of the 40,000 race bibs were allocated. Whoever did not move fast enough to secure a spot now has the chance to get to the finish even faster. “The whole course – and half the time” is the motto. Finishing a marathon in less than two hours is something that even Haile Gebrselassie, Patrick Makau, and their cohorts dream of. When you are on speedy wheels, this goal is possible to achieve for less experienced skaters too. The fastest male inline skaters only need about one hour for the marathon course.

Whether you are out to get your personal best time or to simply enjoy a skate through the main roads across Berlin, the BMW BERLIN MARATHON Inline Skating offers the best conditions regardless of your motivating factors. For the professionals, this is the largest and most important inline marathon in the world, while for about 95% of the participants, it is the international highlight of a fun season on wheels.

Find out for yourselves! We look forward to having you join us for the 39th BMW BERLIN MARATHON on September 29, 2012.