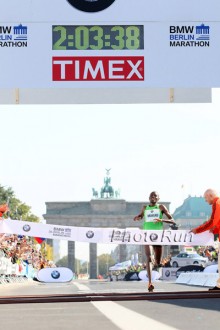 If further proof were needed of the ascendancy of Kenyan distance running over their perennial rivals, the Ethiopians, notwithstanding the substantial inconvenience offered by the likes of Mo Farah, Bernard Lagat and Galen Rupp on the track, and Ryan Hall on the road, then it came with this weekend’s results from the BMW BERLIN-MARATHON.

A world record by Patrick Makau, who won (from two colleagues) by over four minutes, while prompting the abandonment of world record holder Haile Gebrselassie; and a first-time marathon finish and victory for his compatriot Florence Kiplagat, who won by two and a half minutes from, admittedly ageing luminaries as Marathon Majors’ winner Irina Mikitenko, and world record holder Paula Radcliffe.

There have been fast Kenyans in the past, notably Duncan Kibet, who ran 2.04.27 in Rotterdam 2009, then lined up alongside Gebrselassie here in Berlin five months later, only to be blown away. Makau is made of sterner stuff, as anyone who saw his Berlin victory last year, in a downpour, would testify. Yesterday’s demolition job, first of Geb, then of his world record, merely underlined Makau’s strength. But he has a racing brain to go with it.

Like many Kenyans brought up in country communities, Makau is not the most demonstrative of characters; but as well as having the build to withstand long fast training, he thinks tactically. His manager Zane Branson reports that, after his first two marathons, Makau told him that his opponents could now recognise that he tended to follow, then finish strong, telling Branson, “I’m going to have to change that”.

The way he dispensed of Geb at 27 kilometres, by first spurting ahead, then weaving back and forth across the road, prompting the Emperor’s demise, was proof of his tactical acuity as well.

If there was any sense at Athletics Kenya HQ, Makau would be inked onto a squad sheet for London 2012 right now. But, given that ascendancy referred to earlier, at least among the men, perhaps the Kenyan ‘suits’ are waiting for better. And Makau himself did tell us post-race that he wasn’t the only man capable of going sub-2.03.

You got the impression he wasn’t talking about anyone other than his colleagues though. And, albeit one has to be wary of statistics, you can’t argue with eight of the world’s current top ten men’s marathoners (and 18 in 25!); and five of the top eight women. That includes the first seven men and first two women (the only sub-2.20s this year), and the two world title winners too.

Neither Makau nor Kiplagat intends to add to that embarrassment of riches for a while. At today’s press conference Kiplagat said, “I don't have any plans for another marathon at present. I have just completed a marathon for the first time so I want to think about that”.

Makau gave scant solace to potential rivals, albeit he did concede that even he suffered on Sunday. “If Haile had been able to stay in the race longer, say to 35km, I think I could have run even faster.

“I have no plans at present for other races. I shall first spend two weeks recovering. Today I got up, had a shower and my muscles felt stiff so I shall not run today.

“Preparing for the Olympic marathon would be different to the big city races such as Berlin. Firstly, there are no pacemakers so, if I am selected, I think I would train a little differently to how I prepared for Berlin. Here I knew I was preparing to run against the world record holder. In the Olympics it would be different”.

Maybe so, but you get the impression that, whatever happens, Makau is going to be ready for it.