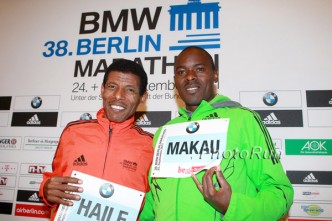 At 38 years of age (with serious doubters believing he is well over 40), Gebrselassie is by far the more experienced. As he reminded today's press conference, he first ran in Berlin (in an ekiden, a marathon relay) in 1992, the same year that he won a world junior championships double, 5000/10,000 metres on the track. Subsequently, after two Olympic golds, a series of world titles and records, he turned to the marathon, and after a hesitant start, third in London 2002, he went on to eight victories in nine completed marathons, including four wins and two world records here in Berlin, the second one, in 2008, being the ground breaking 2.03.59.

With a list of achievements like that, surely only advancing years could undo him? But Makau could well help the process along. One of the younger generation of East African runners, who have gone directly to the marathon (since prize money on the track is at such a premium, with so many good rivals), the 26 year old Makau has built a brief but superlative marathon career, two wins in four completed races with, like Haile, an average of under two hours and six minutes.

As a reference point, this correspondent first attended the Berlin Marathon in 1998, when Belayneh Dinsamo's world record was reduced, by Ronaldo da Costa of Brazil from 2.06.50 to 2.06.05.

It's fitting that this anticipated duel on Sunday should be between representatives of Ethiopa and Kenya, the East African highland nations who have come to define distance running in recent decades. Both men summed up the rivalry succinctly, the elder statesman, Gebrselassie saying, "We need each other," while pretender Makau said, "One wins one day, the other wins the next".

But who is going to win the day after, that's to say, on Sunday?

Both men are coming off questionable performances, Gebrselassie having dropped out of last autumn's New York Marathon, while Makau suffered a bad fall in the London race in April, although he did rally to finish third in 2.05.45!

It was telling that Geb kept saying that his time on Sunday was more important than the victory. "This is part of my plan for the London Olympics. I have to qualify for London, so I've come here, not necessarily for the win, but for the time".

But if that was dedicated to giving Makau a false sense of security, the Kenyan riposted, "I'm not under pressure, because I'm running with the champion. I've done just a few marathons, Haile has done many marathons with fast times. It's an opportunity for me to learn and get more experience.

"Last year, conditions were not favourable. This Sunday looks as if the weather will be good, so I'm hoping to do better".

He won last year in heavy rain, which bunched his sodden socks inside his shoes within ten minutes of the start; but he still prevailed in the final kilometre over colleague Geoffrey Mutai, in 2.05.08. If he is as good as his word, then it will take Gebrselassie at his best to beat him on Sunday.

Having attended numerous of Geb's highly entertaining press conferences, of which this was one more, your correspondent was unkind enough to remind him that he has frequently said that the day an athlete announces his/her retirement, even if it is for a future date, the date of the announcement is actually the day that they retire in their mind. After the disappointment of New York last November, Geb did exactly that, announced his retirement. So?

True to form, he claimed an exemption. "It was not in my plan. I was upset, I didn't plan to retire. New York was complicated".

He was back on more solid ground when someone asked why, when he already had two Olympic golds at 10,000 metres, he wanted to win a marathon gold.

"The marathon medal is the most important," he replied, "especially for Ethiopians, historically, ever since Abebe Bikila won in 1960. If you go home to Ethiopia after a race, and say you won, people will say, was it a marathon? You say, no, it was a 10k, and they say, oh....".

Well, it's marathon on Sunday, and there are a half dozen pacemakers, prepared to go to 30k or more in pursuit of a 2.05 or faster.

There is an outside chance that one of the other leading entrants could win. But realistically, the race is between Geb and Makau.

And may the better man win.

The BMW BERLIN-MARATHON will be broadcasted live in more than 160 countries. In Germany n-tv will start its 4 hour live coverage at 8.30 am. International coverage is provided by Eurosport, BBC 2, Supersport, Al Jazeera, Sport 5 (Israel), Fuji TV (Japan), CBC (Canada), Sky Mexico, Globosat (Brasil) and by Universal Sports via cable as well as Webstream in the US.