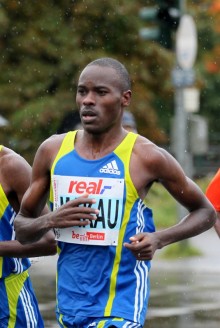 The Marathon world record holder Haile Gebrselassie faces one of his toughest ever challenges in the BMW BERLIN MARATHON on September 25th. With Patrick Makau at the starting line Gebrselassie is facing the fastest marathon runner of 2010. Last year the Kenyan won the Rotterdam Marathon in April, clocking 2:04:48, and ran 2:05:08 at the BERLIN MARATHON last September in a tactical race beset by heavy rain. At the Virgin London Marathon last April Makau fell near the halfway mark and finished a close third (2:05:45). Both runners want to qualify for the Olympic Games next year and have to run fast in order to achieve that goal since competition for the three spots in their respective countries is stiff. “I´m sure he will run fast in Berlin”, Makau said. “But I will try to concentrate on my race. If we are still together at the end the stronger one may win.”

With Haile Gebrselassie and Paula Radcliffe (GBR) on the starting line of the BMW BERLIN MARATHON this is only the third time in history both marathon world record holders are in the same marathon. It happened in 1989 in New York City (Belayneh Dinsamo, Ingrid Kristiansen) and 2005 in London (Paul Tergat, Paula Radcliffe). Strongest competition for Paula Radcliffe in Berlin should come from the German Irina Mikitenko (2:19:19, Berlin 2008) and the European Champion Nayla Yulamanova (2:26:01, RUS) with Kenyan Florence Kiplagat also posing a potential threat, although the world cross country champion of 2009 and world half marathon champion of 2010 failed to finish her marathon debut in Boston last April. Also running is Lidia Simon (ROM) who wants to qualify for her fifth Olympic Games.

The BMW BERLIN MARATHON will be broadcasted live in more than 150 countries.