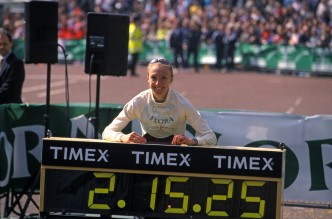 Marathon world record holder Paula Radcliffe of Great Britain is the top female entry at the BMW BERLIN MARATHON on September 25th. With her and Haile Gebrselassie  on the starting line, both marathon record holders are competing in the same race – a premiere on German soil. Thirty-seven year old Radcliffe set her mark of 2:15:25 hrs 2003 in London. The BMW BERLIN MARATHON will be her first marathon after giving birth to her second child in September 2010. Her foremost goal in Berlin is to qualify for the Olympic marathon 2012 in London. The fast course in the German capital is the major reason for Radcliffe to run here. Seven world records were clocked in Berlin (four on the men´s side and three on the women´s side). Haile Gebrselassie set two marks here, 2:04:26hrs  in 2007 and 2:03:59 hrs in 2008 on his way to win this race four times in a row (2006-2009).

The stiffest competition for Radcliffe should come from German Irina Mikitenko, double winner of the Virgin London Marathon in 2008 and 2009. In 2008 she won the Berlin race clocking a German and course record of 2:19:19 hrs.