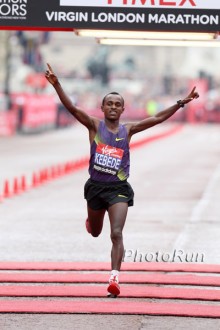 The 2010–2011 World Marathon Majors series resumes with a doubleheader weekend, beginning with the Virgin London Marathon on Sunday, April 17, then jumping over the Atlantic for the Boston Marathon the next day.
The WMM series leaderboard is sure to be reshuffled in the chase for the $1 million jackpot. Many of the world's top marathoners will be looking to chase down WMM series points leaders Tsegaye Kebede of Ethiopia and Liliya Shobukhova of Russia on the streets of London. And another group of talented athletes will be in the hunt for the title on the famed Hopkinton-to-Boston course.

In London, Kebede and Shobukhova lead one of the most talented packs of athletes ever seen on a starting line. Kebede, with 40 points, brings a 10-point lead into London. A win would push him at least 15 points ahead of anyone who could potentially reach second place in the series standings. He will have his work cut out for him, however, as Kenyans Emmanuel Mutai (30 points) and Patrick Makau (25 points) will toe the line with him. Unfortunately, a leg injury has sidelined the 2008 Olympic champion and reigning WMM series champion, Kenya's Samuel Wanjiru.

Shobukhova is the early favorite to retain her WMM series title. She comes into London with 50 points, after 2010 wins in London and at the Bank of America Chicago Marathon. Another London win would give her an almost insurmountable lead heading into the fall marathon season. Ethiopia's Aberu Kebede (25 points), ING New York City Marathon 2010 champion Edna Kiplagat of Kenya (25 points), and fellow Russian Inga Abitova (20 points) will try to keep Shobukhova from running away with the WMM crown.

In Boston, Kenya's Robert Kiprono Cheruiyot (25 points) and ING New York City Marathon 2010 winner Gebre Gebremariam (25 points) of Ethiopia could climb the ladder with strong finishes on Patriots' Day. American favorite Ryan Hall could also work his way into the picture with a podium finish.
In the women's race, returning champion Teyba Erkesso (25 points) of Ethiopia could stay in contention with another win. She can expect challenges from last year's runner-up Tatyana Pushkareva (15 points) of Russia, and American star Kara Goucher, who is returning to WMM action after the birth of her first child last fall.