Sabrina Mockenhaupt hoping for top-3 place at the real,- BERLIN-MARATHON on September 26th 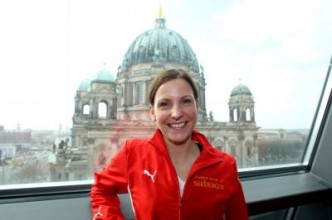 German runner Sabrina Mockenhaupt is hoping to end up on the podium at the 37th edition of the real,- BERLIN-MARATHON. Aiming for a personal best she is facing stiff competition tough by three Ethiopian women and one runner from Japan. Mockenhaupt ran her PR 2008 by winning the Frankfurt Marathon in 2:26:22 hrs making her the number two female German marathon runner behind Irina Mikitenko (who is running Chicago two weeks later). Main contenders on the flat and fast Berlin course are Bezunesh Bekele (27) who placed 4th at the Virgin London Marathon in April and owns a PR of 2:23:09 hrs. Aberu Kebede came in 2nd at the Dubai Marathon in January clocking a PR of 2:24:26 hrs and Genet Getaneh's PB is at 2:26:27 hrs. Tomo Morimoto (Japan) won the Vienna City Marathon in 2006 clocking a PR of 2:24:33 hrs.