30th Vattenfall BERLIN HALF MARATHON with 27,051 athletes from 94 nations 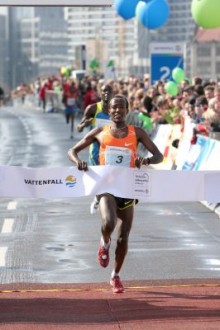 Ethiopia’s Eshetu Wondimu has ended Kenya’s win streak at the 30th Vattenfall BERLIN HALF MARATHON on Sunday. The 28 year-old took the race in a fine 60:16 minutes, beating Peter Kirui (Kenya) by just one second in the final sprint. Ethiopia’s Maregu Zewdie took third place with 60:24. Kenyans had won the Vattenfall BERLIN HALF MARATHON eight times in a row from 2002. 21 year-old Pasalia Kipkoech won the women’s race in 69:43 minutes from her fellow Kenyan Eunice Kales (69:50). Germany’s defending champion Sabrina Mockenhaupt was third with 69:57.

The Vattenfall BERLIN HALF MARATHON attracted a record total entry of 27,501 participants from 94 countries for the race and other parallel events and these competitors had to cope with headwind from time to time, rain showers at the start and temperature around 10 degrees Centigrade. Among the participants were 23,799 runners in the half marathon, watched by around 170,000 fans around the streets of central Berlin. Unfortunately a 43-year-old German runner collapsed and died 500 m from the finish although there was immediate first aid.

In the men’s race a leading group of 13 went through 10 kilometres in 28:39. That was slower than planned, caused in part by the windy conditions and also by the pacemakers falling behind schedule. By the early stages of the race Eshetu Wondimu had already seized the initiative in an attempt to raise the pace. The Ethiopian, who had finished runner-up in the Vattenfall BERLIN HALF MARATHON two years ago by just one second, eventually broke away with his compatriot Maregu Zewdie and Peter Kirui. The race was still open till the finishing straight when Eshetu Wondimu sprinted clear to win by one second.

“When I saw that the weather wasn’t so good this morning, I knew it would be tough to run under the hour. But I was sure that I would run well because I like Berlin and the race a lot. So I’d love to come back and run the real, - BERLIN MARATHON on September 26,” said Eshetu Wondimu. Coming in behind the winner, who earned 2,500 Euros in prize money, were a further four runners inside 61 minutes. The best German was Martin Beckmann (LG Leinfelden-Echterdingen) in 19th place. The 32-year-old improved his best by two seconds with 63:57. One place behind finished the leading Berlin runner, Hagen Brosius (SCC/66:35).

In the women’s race the Vattenfall BERLIN MARATHON confirmed its status one of the top races anywhere over the “Half” with three performers under 70 minutes. Early on Pasalia Kipkoech and Eunice Kales went clear of their rivals and when the Kenyan duo reached 10 km in 32:55, they had an 11 second lead over Sabrina Mockenhaupt. With two kilometres remaining the defending champion Sabrina Mockenhaupt had narrowed the gap to three seconds and almost caught up with Kales who was lagging behind Kipkoech. But the Kenyan women saw Mockenhaupt coming and were able to raise the pace to decisive effect once again. “I wasn’t sure I would win – I prayed that I would win. Originally I thought that I would have to run 67 minutes to win,” explained Pasalia Kipkoech, who along with Wondimu earned 2,500 Euros in prize money. “I knew early on in the race that I wouldn’t be running a personal best,” said Sabrina Mockenhaupt. “I would have loved to have won but two-and-a-half-months’ training just wasn’t enough. I lacked competitive steel and stamina.”