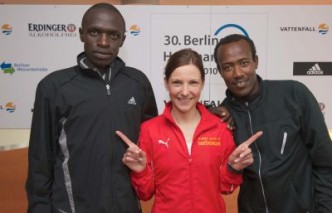 John Kiprotich, Sabrina Mockenhaupt and Eshetu Wondimu (right) with the Berlin Cathedral in the background
© Camera4

A record field of 23,799 runners from 94 countries will compete in Sunday’s 30th edition of the Vattenfall BERLIN HALF MARATHON. Among them is a strong elite field. And the fastest men will once again target a sub one hour time in Germany’s biggest and best quality half marathon. Around 200,000 people are expected to line the flat course through the city centre of Berlin.

Already ten times results of sub 60 minutes were recorded in the Vattenfall BERLIN HALF MARATHON. And once again the favourites are ready for a fast race. The course record stands at a staggering 58:56 minutes, which is the sixth fastest time ever run at the distance. Kenya’s Patrick Makau Musyoki established this mark in 2007. Asked if he feels ready to attack this time Ethiopia’s Eshetu Wondimu replied: “Let’s wait and see what happens on Sunday. If the pacemakers are running well then I should at least achieve a personal best.” It was just two weeks ago when the 28 year-old improved to 59:53 minutes in The Hague. But Eshetu Wondimu had been unlucky in Holland since he fell after around 10 k. “Had I not fallen I would have run under 59 minutes in that race,” said the Ethiopian, who intends to show that he is capable of such a time in Berlin. Wondimu knows the course very well. The last time he ran here was in 2008, when he was beaten by just one second, finishing second in 60:01 minutes.

Eshetu Wondimu’s biggest rival will come from Kenya: John Kiprotich intends to continue the impressive Kenyan win streak in Berlin. In the past eight years the men’s winner of the Vattenfall BERLIN HALF MARATHON has always been a Kenyan. “I have trained well in Iten and I am ready for a very good performance,” said John Kiprotich, who is the fastest runner in the field with a personal best of 59:23. A number of other Kenyans are in with a chance: Among them are Josphat Kamzee (PB: 60:43) and William Chebor (60:51) as well as Patrick Nthiwa (62:33). Though Nthiwa has a much slower personal record he is said to be in very good form.

There may well be a home win for Germany in the women’s race. Sabrina Mockenhaupt will be back to defend her title. A year ago she had taken the race with an impressive personal best of 68:45 minutes. With this time the 29 year-old moved up to become the second fastest German ever at the distance behind Uta Pippig (67:58 in 1995). Sabrina Mockenhaupt’s strongest rivals will most likely be two Kenyans: Former world-class track and cross country runner Leah Malot (PB: 69:35) and Pasalia Kipkoech (69:56). Kipkoech showed a great preformance, when she won the New Year’s Eve race at Sao Paulo in 2009.

„My recent training went well. If I compare my performances in training with what I did a year ago I have confidence for Sunday,” said Sabrina Mockenhaupt, who will probably opt for a more conservative approach. “I plan to run the first half at a good 69 minute pace so that I will have something left in the second part. Of course I would like to win again in Berlin and achieve another personal best,” said Sabrina Mockenhaupt. Sunday’s Vattenfall BERLIN HALF MARATHON will be the spring season’s climax for her since she will not run a marathon.