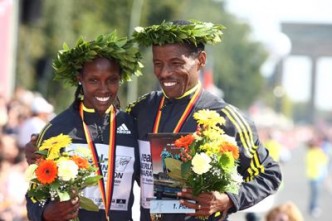 The Ethiopian duo of Haile Gebrselassie and Atsede Habtamu Besuye earned maximum points in the World Marathon Majors (WMM) rankings with their double success in the real,- BERLIN-MARATHON. While Gebrselassie achieved his fourth victory in a WMM race, Habtamu completed a dream debut: on her very first appearance in a WMM event she collected 25 points.

The points earned by Gebrselassie and Habtamu will not have a significant impact on who will be the overall champions for the current season 2008 – 2009. Sammy Wanjiru (Kenya) and Irina Mikitenko (Germany) have built up too big a lead in the rankings. But it’s a different matter as far as the standings for 2009 – 2010 are concerned.

The real,- BERLIN-MARATHON once again lived up to its reputation for top-class results. Haile Gebrselassie won in 2:06:08 to move up to second in 2008 – 2009 rankings. The Kenyan Francis Kiprop collected 15 points for second place after a world-class run of 2:07:04. Here in detail is what the leading results from the real,- BERLIN-MARATHON mean in terms of WMM points:

Two races remain in the WMM Series for 2008 – 2009 following the real,- BERLIN-MARATHON: the Bank of America Chicago Marathon on October 11 and the ING New York City Marathon on November 1.

The Boston Marathon and the Virgin London Marathon complete the World Marathon Majors schedule and take place in April.

The Olympic champion Sammy Wanjiru (Kenya) leads the men’s rankings for the 2008 – 2009 Series with 65 points from Haile Gebrselassie (50). Irina Mikitenko (Germany) has already achieved the maximum total of 75 points from three races and has a clear lead over Dire Tune (Ethiopia/40) in the women’s competition. Mikitenko is on course to become the first woman athlete to win a WMM Series twice in succession, having already won the 2007 – 2008 edition.

The full standings for the 2008 – 2009 and 2009 – 2010 series as well as further information about the World Marathon Majors and participating athletes are available from: www.worldmarathonmajors.com