Gebrselassie versus Kibet – the fastest marathon duel ever? 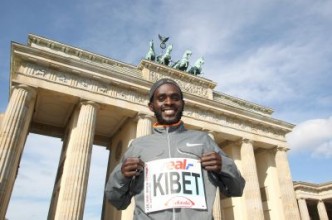 Duncan Kibet in front of the Brandenburg Gate.
© Victor Sailer/PHOTORUN

No one could have imagined that the BERLIN-MARATHON would become one of the most spectacular sports events in Germany when the race was started for the first time 35 years ago. That happened next to the Grunewald, a forest in West Berlin, and there were only few spectators. Today the real,- BERLIN-MARATHON attracts around one million people who celebrate one of the greatest running events on the globe. It was almost 20 years ago – after the fall of the Berlin Wall in November 1989 – when the race got a huge boost. Leading through both parts of the German capital from 1990 onwards the real,- BERLIN-MARATHON became famous for superfast winning times, great crowd support and growing fields. This Sunday we could well see another thrilling race: defending champion and world record holder Haile Gebrselassie (Ehtiopia) will be up against Kenya’s Duncan Kibet, who leads the current world season’s list.

A record number of 40,923 runners from 122 nations have entered the 36th edition of the real,- BERLIN-MARATHON. Since the race belongs to the World Marathons Majors (WMM) even more people want to take part. A year ago 35,783 runners finished the real,- BERLIN-MARATHON. That was the highest number ever in the history of the event and the 2008 event became the seventh biggest marathon ever seen. In 2006 Race Directors of the prestigious marathons in Boston, London, Berlin, Chicago and New York had formed the WMM.

Gebrselassie targets his own record once again

So far five runners have established personal bests of sub 2:05 at the classical distance. Two of them will run in Sunday’s real,- BERLIN-MARATHON. While Haile Gebrselassie had improved his global record in Berlin in 2008 to 2:03:59 Kenya’s Duncan Kibet had run 2:04:27 earlier this year and has moved up to number two on the alltime list.

Haile Gebrselassie’s goal is obvious: He intends to break his world record again. If he succeeds it will be the third time in a row that he would establish a new world best at the real,- BERLIN-MARATHON. So far the 36 year-old has broken an amazing 26 world records during his career. Gebrselassie thinks that he can at least slice off another 30 seconds from his present marathon record. “If everything fits together perfectly then may be even 2:02:59 would be possible,” says the Ethiopian, who is going for a record fourth consecutive victory at the real,- BERLIN-MARATHON.

For more than two years Haile Gebrselassie has not competed against an athlete as strong as Duncan Kibet in the marathon. This could well become a fascinating duel. “I feel honoured to be able to run against Haile Gebrselassie,” said Duncan Kibet during Thursday’s press conference in Berlin. My training went very well and I think it is a very good sign that my training partner James Kwambai ran 59:09 minutes last Sunday at the Rotterdam Half Marathon.” Duncan Kibet did not want to comment on a possible world record attack, but said that he intends to break his personal best. For this he must of course run in the region of the world record. “After Rotterdam I though that I might be able to run even faster in Berlin. So this is why I decided to go for this race.”

Looking ahead to a duel with Haile Gebrselassie the Kenyan record holder said: “I don’t know about Haile’s training. And he does not know about my training. So we will have to wait and see how it develops. But I will try to run his pace.”

There will be two more Kenyans and one Ethiopian with high-class personal bests in the race. Francis Kiprop came fourth at the Seoul Marathon in 2008 with 2:08:30 and Mariko Kiplagat (all Kenya) placed fourth at last year’s real,- BERLIN-MARATHON in 2:09:04. Ethiopia’s Eshetu Wondimu was able to improve to 2:08:41 despite bad weather conditions in this year’s Dubai Marathon. The strongest non-African runner could be Atsushi Fujita (Japan) who has a personal best of 2:06:51. This however is already nine years old.

Ethiopian favourites in the women’s race

Askale Tafa Magarsa will be the favourite in the women’s race on Sunday. A year ago the 24 year-old Ethiopian finished second behind Irina Mikitenko (Germany), clocking a great personal best of 2:21:31. With that she remained the second fastest woman worldwide in 2008. Now Askale Tafa Magarsa returns to the real,- BERLIN-MARATHON and will be eager to further improve. She may well be able to establish a world season’s best, which currently stands at 2:22:11. Irina Mikitenko clocked this time when winning in London in April. Askale Tafa Magarsa’s strongest rival probably will be a fellow Ethiopian: Atsede Habtamu clocked 2:25:17 in torrential rain in January’s Dubai Marathon, where she took second place.

Genet Getaneh will also be in with a chance on Sunday. The 23-year-old Ethiopian finished fifth in 2:26:37 at the Dubai Marathon this year. The strongest Kenyan should be Leah Malot. She has a very good long distance track record and improved to 2:30:29 at the Paris Marathon this April.