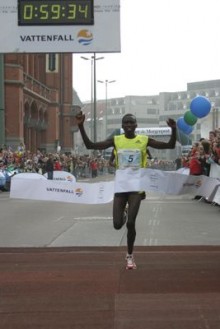 Bernard Kipyego and Sabrina Mockenhaupt won the men’s and women’s titles at the 29th Vattenfall BERLIN HALF MARATHON. The Kenyan took the title in the world-class time of 59:34, making one of the fastest debuts ever at the half-marathon while Germany’s women’s champion improved her personal best to 68:45, the fastest time by a German woman this year. A total of 25,193 runners from 85 countries entered the 29th edition of the Vattenfall BERLIN HALF-MARATHON, including 21,725 for the half marathon distance of 21.0975 km.

Conditions were ideal with the temperature gauge showing 13 degrees Centigrade, no rain and only a light breeze to disturb the elite runners. 170,000 spectators witnessed a thrilling men’s race, decided only in the home straight. Bernard Kipyego, making his debut at the distance at the age of 22, claimed victory in 59:34, the fifth fastest time of the year, to beat his fellow Kenyans Sammy Kosgei (59:36) and Wilson Kipsang Kiprotich (59:38). Samuel Gichochi Mwangi (Kenya) was fourth with 59:55. For the first time in the history of the Vattenfall BERLIN HALF MARATHON four men went under the hour. Those performances made the Berlin race the second fastest overall in the world this year.

Bernard Kipyego was ranked among the favourites before the race, even though he had never run a half-marathon before. Two years ago he achieved an impressive third place at the World Cross-Country Championships. In the same year of 2007 he ran the world-class time of 26:59.61 for 10,000 m on the track. “Before the race I thought my chances of winning were 50-50, but my confidence grew as the race went on,” said Kipyego, who hopes his success in Berlin will be rewarded with a place in the Kenyan squad for the World Half Marathon Championships in Birmingham in October.

Sabrina Mockenhaupt broke away shortly before 15 kilometres in the women’s race and improved her personal best from well over six months ago by six seconds to 68:45. The 28-year-old won from the Kenyan duo of Hellen Kimutai (69:27) and Lydia Njeri (70:08). Sabrina Mockenhaupt’s performance is the sixth fastest for women in the history of the Vattenfall BERLIN HALF MARATHON. It also put her tenth in the world rankings for the year.

“I was worried when the two Kenyans stayed with me for such a long time. I’m not used to that,” said Mockenhaupt and added: “Of course, it meant a lot to me to win in Berlin.” The wind was a problem for the runner from the Siegerland region, “But it’s a really fast course.” Sabrina Mockenhaupt’s next goal is to qualify for the 10,000 m at the World Championships in Berlin.

Listen to the interview: