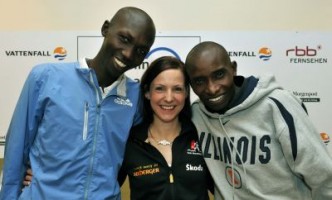 Sunday’s Vattenfall BERLIN HALF MARATHON will be the first major international road race in Germany this year. A record number of 21,679 runners from 85 nations have entered the race. Adding other events the figure will rise to more than 25,000. 150,000 spectators are expected to line the flat city loop course this Sunday. The Kenyans will be the big favourites in the men’s race while Sabrina Mockenhaupt hopes to become the first German women’s winner of the race since Luminita Zaituc in 2005.

The Kenyans once again will chase fast times on this very fast city loop course through the centre of Berlin. So far runners have broken the prestigious one hour barrier six times in the German capital. Course record holder Patrick Makau Musyoki (58:56) will not be able to defend his title in Berlin on Sunday because he will run his marathon debut on the same day in Rotterdam. But one who could achieve a similar result is Wilson Kipsang Kiprotich. He was sixth a year ago in Berlin with 61:03 minutes, but meanwhile has improved by more than two minutes. It was in Ras Al Khaimah (United Arab Emirates) in February where he came in second behind Patrick Makau Musyoki, clocking 58:59. “I am in fine form. If the weather is good, then with the help of the pacemakers we will run very fast. Hopefully we will achieve a time of around 59 minutes or even faster,” said Wilson Kipsang Kiprotich.

Kiprotich will be up against two prominent Kenyan marathon runners in Berlin on Sunday: Rodgers Rop was the winner of prestigious marathons in Boston and New York in 2002 while Patrick Ivuti took the Chicago Marathon in 2007. Both have sub 60 minutes personal bests at the half marathon: Rop has run 59:49 while Ivuti was 22 seconds faster. At least two more Kenyans are in with a chance as well. Samuel Karanja Karuku is the winner of last year’s 25 k race in Berlin while Bernard Kipyego will run his debut on Sunday. He was third in the World Cross Country Championships in 2007.

Since Japan’s Tokyo Women’s Marathon winner from 2008, Yoshimi Ozaki, had withdraw from the race due to slight a back problem there is one big favourite in the women’s race: Sabrina Mockenhaupt. “For me the Vattenfall BERLIN HALF MARATHON will be the main road race this spring. But I don’t want to make any predictions regarding times. If the weather is fine and the course is as fast as everyone says then I will run fast,” said the 28 year-old German. Kenya ’s Hellen Kimutai, who has a personal best of 69:59 minutes, could be her strongest rival on Sunday.