Top Contenders at the Vattenfall BERLINER HALF MARATHON on April 5th 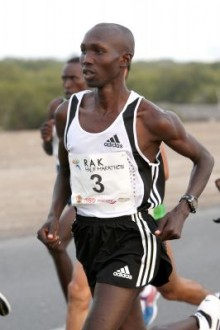 Wilson Kipsang Kiprotich finished sixth in last year´s race with 61:03 clearly behind winner and fellow countryman from Kenya, Patrich Makau Musyoki. Since then the Kipsang Kiprotich improved by more than two minutes and returns to the Vattenfall BERLIN HALF MARATHON as the favourite. It was just two months ago, when he took second in the Ras Al Khaimah race in the United Arab Emirates. With his time of 58:59 minutes he became the fourth runner to break 59 minutes. And Kiprotich’s personal best is now just 26 seconds slower than the world record. Wilson Kipsang Kiprotich will be up against two big names in road running: his fellow countrymen Rodgers Rop and Patrick Ivuti. 33 year-old Rop has won the Boston- and the New York Marthon races in 2002. Two years ago he took the Hamburg Marathon with a personal best of 2:07:32. While his half marathon best stands at 59:49 Patrick Ivuti has run the distance even faster: He clocked 59:27 in Rotterdam two years ago. After that race he went on to win the Chicago Marathon. Ivuti has a great track record as well. He was fourth in the Olympic 10,000 m in Sydney 2000, missing a bronze medal by less than a second.

But there is even more Kenyan talent in Sunday’s race. Samuel Karanja Karuku, who was the winner of Berlin’s 25 k race in May 2008 with 1:13:50, should be in with a chance. That also applies to Bernard Kipyego. The 22 year-old will run his half marathon debut on Sunday. He was third in the World Cross Country Championships in 2007 and has superb track speed with a 10,000 m best of 26:59.51 minutes.