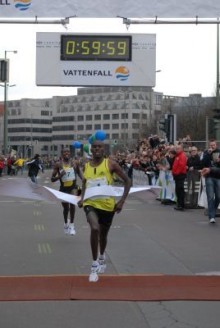 Once again the Vattenfall BERLIN HALF MARATHON has produced top-class winning times. The 28th edition of the race also ended in a victorious Kenyan double. The defending champion Patrick Makau Musyoki won the biggest and most prestigious German race over 21.0975 km in exactly 60 minutes. Beaten in the tightest of finishes was Eshetu Wondimu (Ethiopia) who crossed the finish line besides the city’s Red Town Hall a second behind. The women’s winner Peninah Arusei achieved the third fastest time in the world this year with 68:22 and the third fastest performance in the history of the race.

Taking into account all forms of competition, the 28th edition of the Vattenfall BERLIN HALF MARATHON had a record number of 24,551 athletes from 86 nations entered. For the first time a German half-marathon had over 20,000 entries (20,660). Inline skaters, handbikers, wheelchair competitors, power walkers and those entering the 3.5 km Fun Run completed the field. Despite cool weather conditions, over 150,000 spectators lined the streets to support the race.

“We intended to run faster. Myself and my Kenyan colleagues we worked hard to push the pace, but it was simply too cold today. But I intend to come back to Berlin next year to break my course record,” said Patrick Makau Musyoki. The defending champion still clocked the seventh fastest time of the year and the seventh fastest in the history of the race. A year ago Patrick Makau Musyoki had run the course record of 58:56 minutes which is still the fourth fastest time ever.

This morning split times indicated that the course record would probably be out of reach. 5 k were passed by 14:07 minutes. While all big favourites were in the leading group the pacemaker was not: Charles Ngolepus had dropped back far too early. “This was not as we had planned it,” said Race Director Mark Milde. The 10 k point was reached in 28:22 – almost one minutes slower than a year ago. 42:48 was the split time for 15 k and then a group of four runners headed for the 20 k mark. It was not before the last few metres that the battle for victory was decided in favour of the defending champion. Eshetu Wondimu had been fourth a year ago in Berlin when he had clocked 60:08 minutes. Five runners finisehd within 61 minutes.

The cold weather also affected the performance of the women’s winner, though Peninah Arusei still did better than expected. “In warmer weather I could have run faster. I think in the future a time of 67 minutes is possible for me – this is my goal,” the 29-year-old Kenyan said. In Berlin she improved her previous personal best by 61 seconds. “Early in the race I looked back to check about the others. I was confident that I would win,” she commented her solo race which she won ahead of Pauline Wangui (Kenya/69:51) and former Kenyan Isabellah Andersson (Schweden/71:24).

For much of the race it had looked as if Peninah Arusei would be able to improve the world leading time of her fellow countrywoman Philes Ongori (67:57 minutes in Marugame/JPN). After a fast 31:56 minutes Arusei had passed the 10 k mark – this was just 14 seconds slower than her personal best, which she had run three weeks ago in Paderborn. But in the end she slightly slowed and missed Ongori’s mark by 25 seconds.

In four weeks time Peninah Arusei will come back to Berlin for the traditional ,Berlin runs ... 25 k’ race, which she won already two years ago. Taking today’s performance Peninah Arusei could be in for a record chase on 4th May: The nine year-old record by Susan Chepkemei (Kenya) stands at 1:24:29.