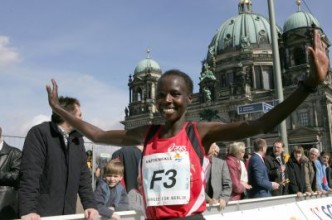 Edith Masai will return to the Vattenfall BERLINER HALBMARATHON.
© www.photorun.net

Defending champion Edith Masai will be among more than 20,000 participants at the 27th Vattenfall BERLINER HALBMARATHON on 1st April. The 39 year-old Kenyan had won the race with a course record of 67:16 minutes, which remained the fastest time of the year 2006.

Organisers hope to present spectators a great duel on 1st April since Edith Masai will be up against Benita Johnson, who is one of the strongest non-African and non-Asian long distance road runners at present. Being twelve years younger than Masai the Australian has a personal best at the half marathon of 67:55. For Johnson the Vattenfall BERLIN HALF MARATHON will be the dress rehearsall for the Flora London Marathon on April 22nd. A year ago Edith Masai had already won a thrilling duel on Berlin’s roads. She then beat Deena Kastor (USA) into second place.

The Kenyan will probably have to be in similar shape than last year to be able to also beat Benita Johnson in Berlin. The Australian is said to be in fine form. Both of them, Masai and Johnson, have a very successful cross country background. Masai had won the World Championship’s short course event three times in a row (2002 to 2004) while Johnson had sensationally won the long distance race in 2004. So that year in Brussels the women’s World Champions were Edith Masai and Benita Johnson. Now they are in one race in Berlin.

More information is available at: www.berliner-halbmarathon.de